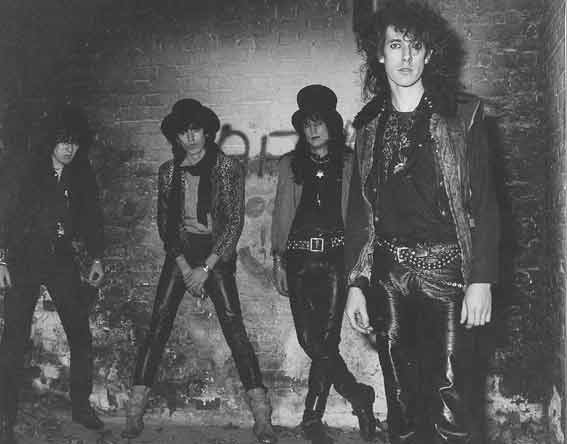 The Fallen Angels was formed in 1984 with Knox (singer/songwriter from the Vibrators) on vocals and guitar, with the Hanoi Rocks rhythm section of Sam Yaffa on bass, the late Razzle on drums, and Nasty Suicide on rhythm and some lead guitar. Also guesting on the first album were Cosmic Ted and the Psychedelic Kid, (Mike Monroe and Andy McCoy respectively). The band came about because Knox was on the same management as Hanoi Rocks and had a lot of songs he wanted to do. One of Hanoi's manager's Richard Bishop had the bright idea of putting Knox together with Hanoi Rocks to record an album. The album was rehearsed and recorded at the now legendary Alaska Studios down under the arches at Waterloo, London. The album band never played live though Nasty Suicide did guest at a London gig.

The first release was the single "Amphetamine Blue" (FALL 022) followed by the album "FALLEN ANGELS" (FALL LP 23) (with a cover painting by Knox depicting a murder scene outside the 100 Club in London's Oxford Street), and then the single and 12" "Inner Planet Love/Precious Heart"

Knox then put a line up together to do live work in the UK which comprised of Knox (vocals/guitar), Matt Kellett (guitar), Mark Duncan (bass) and Knox's cousin Richard Wernham (ex-Motors, drums). Two more albums were recorded, this time for Jungle, Fallout's sister label. "IN LOVING MEMORY" (FREUD 12) (1986) (featuring a painting by Knox on the cover of 'Jesus' with an electric guitar in front of New York) was a more introspective pop album than the first. It also featured Andy McCoy and Nasty Suiside on guitars. The third (and last album) was called "WHEEL OF FORTUNE" (FREUD 23) (1989) and also had Nasty Suicide guesting on guitar. It too was a fairly introspective pop album. There was also a 12" single "Clouds" (JUNG 41T) (1988) released from the album recording sessions, and a 7" single "Teenage" (JUNG 47) (1989). The band played a few more gigs including two festivals in Greece, and ended up as a three-piece before calling it a day as there didn't seem to be enough interest in the band.

First album cover.
(I have the actual painting back, same as this but a bit distressed
- it's been at Jungle Records for 20 or more years -
- and it's for sale.)